We have the series of articles about Adding an internal SSD driver as second hard driver on Dell Studio laptop. You might be strange that why you could not find out all of them by searching, because we have finished the part 1, part 3 and Part 4 but not part 2 since part 2 will be longer and will come with more pictures. We were looking for spare time until we got in the holiday.

Yes, this article is just the part 2. The following is the total series of articles:

Part 2 will include steps which we did with pictures, but we missed some pictures for some steps, you can follow the video which we recommended in part 1.

The following are the steps which we did:

1: Remove the battery and 7 screws on the back , to remove back cover:

2: Remove wires for PCI cards something:

3: Remove back base screws and 2 screws in battery place, and turn laptop to remove keyboard top part;

4: Loose 2 screws and move keyboard edge protectors, now you can move keyboard but be care for the connections belts. my laptop has 2 connections with the keyboard, which is different with the one in the video, maybe one of them is for my finger print detector;

5: Remove the metal base cover:

6: Now we are going to use the internal hard driver bay caddy with adapter (left) to replace the optical driver (right) on the laptop:

8: Before we install the caddy, remember to install SSD driver in the caddy first:

9: Plug the caddy with SSD, better to install a side screw to tight caddy better; 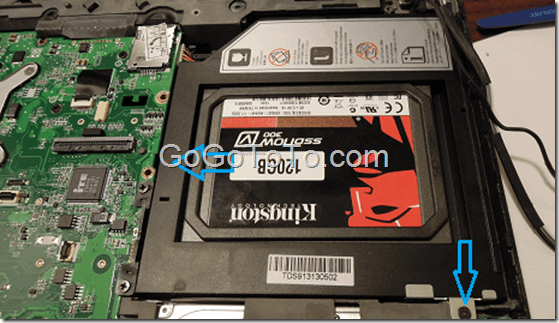 10: The left steps are reversing all steps which we did before, install back all parts which we uninstalled:

Now we get a dell laptop with 1 regular hard driver and 1 SSD driver, which we will get much better system loading speed after we install OS system on the SSD driver, and try to boot from SSD drive. This is our main content in our next part.

Note: If you can not understand above steps, please follow the video which was in part 1. Good Luck!