Dell Inspiron 15 i15547-5033sLV Signature Edition Laptop. It was a nice laptop at the on sale price at $399.99 CAD in 2014. We have used it for over 1 years by now. However, we are not happy with its hard driver IO speed, sometimes we found the software loading very slow.

The best solution is replacing hard drive with a SSD. We had a plan to add a SSD as the second hard drive firstly, however, when we opened the back cover from the laptop, we saw the inside is like the below screen showing: 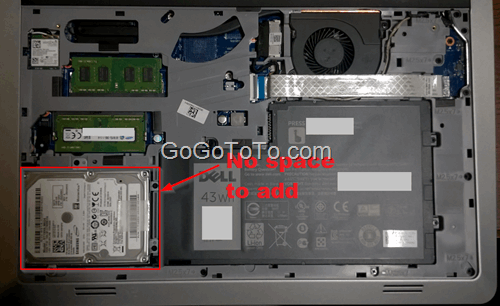 We also searched online, seems nobody gave a good solution for adding a SSD (not replacing old HDD).

So, unfortunately, we will have to take out the existing HDD and replace it with a SSD later. The problem for us now is how to migrate existing software system to new SSD without losting existing data and software applications.

We will have new blog to introduce the replacing process.