(Updated on April 2016) We have an old Dell Studio 1535 which is still working well. But we want to add an extra hard driver on it, the best solution is adding a SSD (Solid State Drive) driver and install boot system on it so that the laptop can boot faster.

The most popular solution is removing existing optical driver from Studio 1535 then install new SSD driver in the same space.

Firstly we need a replacing hard driver Bay Caddy Adapter like the following one: 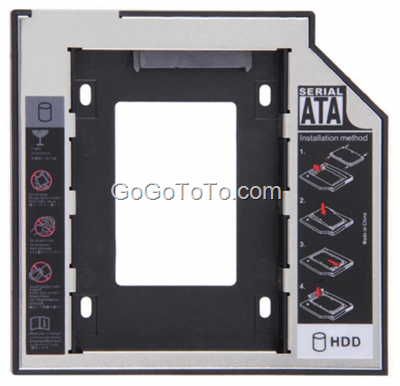 ## Where do we buy the SSD/HDD Caddy ? We found a sample from here, which you can buy the caddy from. Also you could find more choices from your local stores. ## How to remove optical driver ? Nowadays the newer laptop can be removed optical driver easily due to new design. However, you might find much harder to remove an optical from an old laptop. Here is a great YouTube video which teach you to remove optical driver from Dell Studio 1535 (If you have newer laptop, you possible only need to loose a single screw):
Also we need to know Dell Studio 1535 only support SATA II but not SATA III, which will be a little bit slower than SSD on other computers, however, any SSD with SATA III is still compatible with SATA I and II, so don't worry any popular SSD in current market is OK for the old Dell Studio 1535. We will find more information about add extra SSD on Dell Studio 1535.