Due to Google’s data, The Top 10 Search Keywords in all over the world is in the following list:

END_OF_DOCUMENT_TOKEN_TO_BE_REPLACED

Google owned a web system named Trending. Every year Google can get the searching trending data, with they named a top keywords list.

This is Google hottest keywords rank (you might not see the result directly because you have to set, Google doesn’t do a good job for this list. )

The No.1 is Mr. Nelson Mandela, the great man in the world, former South Africa President.

iPhone and Samsung Galaxy are in the top 10 list, but Google might be sad for their Android or tablet. 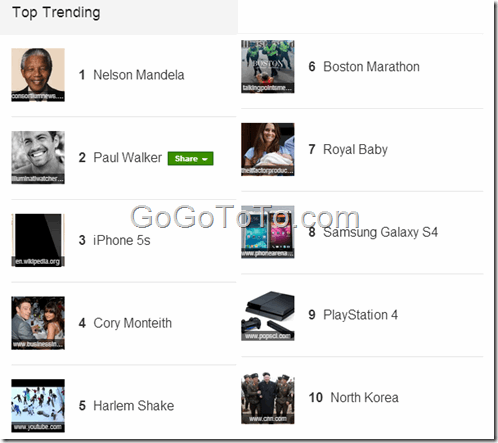 If you can not see above screen in Google Trend, remember changing area setting: change to Global since Google set your local area by default:

Microsoft today announced a new version of Bing searching engine. They call this version is Transforming Search from Finding to Doing.

“…a major update to its Bing search engine that fundamentally transforms the way users search the Web. The update, the most significant since Microsoft launched Bing three years ago, is designed to help users act quickly by taking advantage of the Web’s evolving fabric.”

The main updates looks like the Social searching feature.

With the new Bing, user can get advice more easier and get recommendations from friends or even experts, The new Bing provides a new social sidebar which put the right side by default. 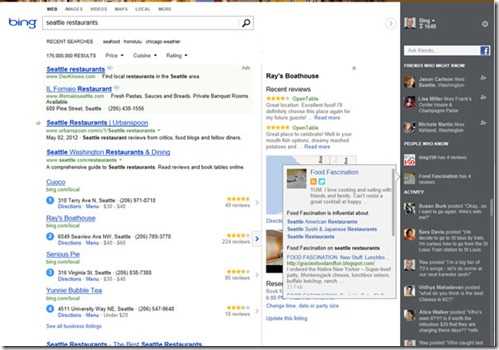 The new Bing will be presented in a three-column new design that provides more and useful information.

We are a search engine with: 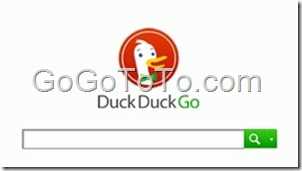 Any, DuckDuckGo intents to No record user information. This is nice for most of users, especially for mobile users, because when people use cell phones, they most likely DO NOT anybody else collect any information from their private devices.

2011 June 20, People’s Daily, a News and Media company which managed by China Government, rebranded their own search engine, the domain name changed from Goso.cn to Jike.com.

Jike, means fastly and quickly in Chinese. People’s Daily said it also chose the name because it sounds like “geek” in English, “representing a computer expert or enthusiast.”

The home page of Jike.com is just like other search engine page, a searching box is the main content:

Why People’s Daily want to launch their own search engine but not use the biggest search engine in China – Baidu.com, we think they have their own reasons such as content and business. For the government, China can build a robust searching engine easier than other tech companies in China.

The launch ceremony of the new domain name and web search platform of jike.com themed “Future, begins immediately” was held in its new office in World Financial Center Monday in Beijing, one year after the running of the beta version. The new domain name “jike.com” and the new company logo developed based on the concept of tangram as well as the new web search platform were officially launched on the ceremony. 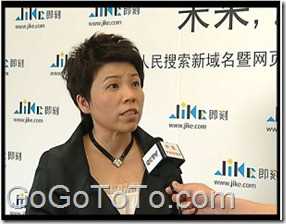 Taking advantage of its new-comer’s strength, jike.com made great breakthroughs in large scale web search technology and launched its web search platform with a multi-billion full-text indexing capacity within one year. This platform utilizes many advanced technologies including high-throughput mega storage and massive parallel processing as well as the latest advances in core search algorithm by its top-tier search R&D team, making the search results more accurate and richer.

“The State requires that we have our own search engine technology with Chinese intellectual property right. If you have grasped this technology, you own the commanding height, especially for internet search engine, because it’s information gateway. If we have mastered this info gateway, we can know better what the public want, I mean common people’s inner voices and needs,” said Deng Yaping, general manager of jike.com.

The new logo, developed based on the concept of tangram, a dissection puzzle originated from China, takes on blue—the color of sky symbolizing broad developing space, yellow—the color of sunshine which nurtures things to grow, and black—representing modernness and rationality as its basic colors.

The straight cut line of tangram is very special compared with the more traditional curve line in Chinese culture. It creates infinite combination of patterns with basic geometric figures, showing the scientific, rational and modern beauty of cutting-edge technologies. It sparks wisdom and knowledge from playing, a way in line with the life style of the young people in the modern world.
Guests from cooperating organizations including Chinese Academy of Sciences, China Development Bank, China Telecommunications Corporation and National Geomatics Center of China as well as professionals from well-known IT companies such as Sina, Sohu, Tencent, Baidu and Qihoo witnessed this significant moment in the development of jike.com.

There is also other report about Jike.com

Google released a new tool named Search Globe, “a new visual display representing one day of Google searches around the world—visualizing the curiosity of people around the globe.”

Search Globe is a browser-based tool. With this tool, users can see various parts of the world one day, and what searching keywords. 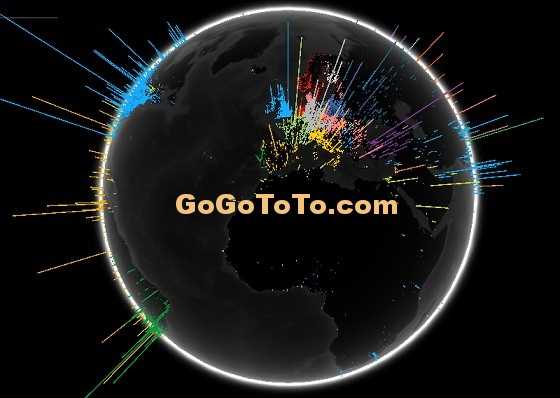 “The Search Globe visualizes searches from one day, and shows the language of the majority of queries in an area in different colors. You’ll see a bright landscape of queries across Europe, and parts of Asia for instance, but unfortunately we see many fewer searches from parts of the world lacking Internet access—and often electricity as well—like Africa. We hope that as the Internet continues to become more accessible over time and people continue to ask questions, we’ll see this globe shine brightly everywhere.”
— from Official Google blog

This tool is the application of Google data WebGL arts, and its back-end technology uses a user’s computer hardware to quickly draw 3D graphics. For using this tool, users must use a browser that supports WebGL, such as Google Chrome.

Google have also open sourced WebGL Globe’s (see here), developers can use their own data to develop their own services.