We had a case of Windows system and installed programs occupied our hard disk space some much. We tried cleaning disk and uninstalling all unimportant programs, but we still saw the available disk space was not enough.

There was one “big” software which we were using, we doubled it could involve other hide software or components which we did not know and see directly. It was Visual Studio 2015;

We directly checked part of folders first and found there was on system images folder which was from installed Android SDK for Visual Studio 2015, it occupied at least 30 GB disk space!

We double checked that SDK and realized they were some simulator Android devices. since we no more used them, we should remove them for reducing hard disk usage.

However, how to remove them? Delete them directly ? You might possible delete them but you took your own risk of damaging related installed software.

Just open the Android SDK Manager, select all System Image items which were installed, in our case, we had API 19, 22, 23 simulator devices which needed to be removed. so we checked on all system images under API 19, 22, 23 and clicked Delete x packages button… 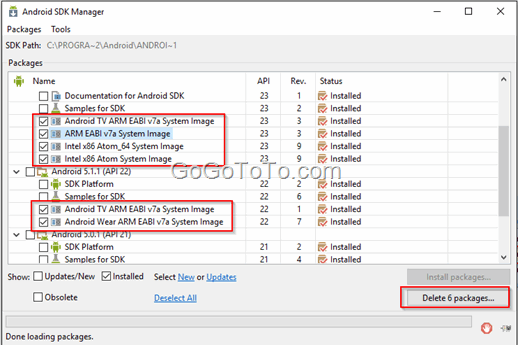 After simulators deleting, we saw we got more hard disk spaces.