We actually had two type of data on the SD card: Apps and Photos (Including Video, Music files and other files). If you are familiar with computer with Windows system, you might understand a case of how to move a hard drive from one computer to another computer: When we moved a hard drive to another computer, we could see the original photos, video, music files and our document files directly, they were not changed; But we could not use the installed software, we had to install the application again, even we could see the application files and folders. 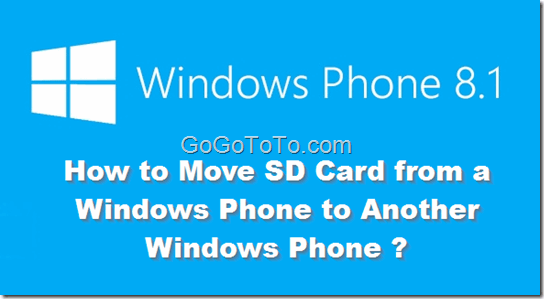 The photos and video, or music, document files, are just static data on the storage devices such as hard drives or SD cards, so we can move those static data to other places without problems.

Applications Can NOT be Moved Directly on Current Windows System

Unfortunately, Windows Phone 8.1 system (I guess Windows Phone 10 also currently), the Apps are just like a desktop system applications, they can not be moved to another Windows phone directly either.

A Real Case of Moving SD Card from a Windows Phone 8.1 to Another Windows 8.1.

This backup process will spend your time, so just wait and make sure it completed all content backup before you start the next step;

If you have too many photos and video, you can only backup the apps and text message items through your phone first because the phone uploading speed is slow; Then you connect your phone to computer or take out SD card from phone and then use SD card adapter to insert to SD card reader slot on your computer (if applicable), copy all photos and video to your computer. This way is much faster than you do backup way on your phone.

There are lots of good SD / Macro SD card deals on Amazon website. Their prices are very competitive:

2: Try to move apps from SD card to Phone if you want to keep some apps on the old phone:

Note: Since your phone’s storage space is limited, you can not move all your apps to your old phone, so you will have to compare the app’s size and phone’s available space before moving an app to phone. Select the most wanted app by yourself first .

3: Uninstall all left apps on the SD card through old Windows phone:

If you see no more phone space to move apps from SD card, then you will have to uninstall all left apps, otherwise these apps files will not be useful on new Windows phone but they still occupy the SD card space, so better uninstall them before moving SD card.

You will have to uninstall app one by one.

4: Double Check on the old phone any other files still on the SD card ?

Such as check download files, temporary files ? If there are files, try to delete them.

7: After you seeing a message notifying you can move SD card safely, power off the old Windows phone, take out the SD card;

8: Insert this SD card into new Windows phone and power on the new phone, you will see the below screen: 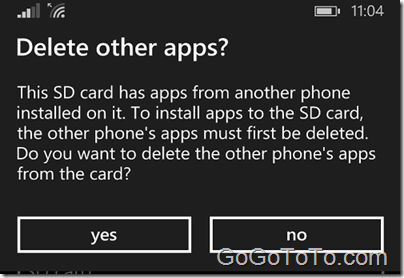 Since we have already uninstalled all existed apps, so here we just click yes, it should not bring any problem.

9: Give time to new Windows phone to recognize all photos, video and other static data files.

If you have lots of photos, video and other static files on the SD card, the new Windows phone can not show them for you at once when you just inserted the SD card, you will have to wait some while to let new Phone system to recognize those files.

You can see the updating slider run on the phone top during the static files recognize process, for our case we waited around 10 minutes for Windows phone show back us our old photos.

Now the SD card moving process is done. Good luck for your case !