The following is Government of Canada’s 2012 Permanent Resident Operational Targets in 2012. Updated in January 1st, 2012.

Operational targets are based on, but not the same as, admission targets. The following definitions may be helpful in understanding the differences.

CIC’s Annual Immigration Plan: Every year, CIC tables an immigration plan that outlines the number of permanent residents to be admitted in Canada.

Operational targets: The number of visas that must be issued in order to have admissions fall within the range set in the immigration plan. This number is often higher than the admissions targets. The operational target takes into account the fact that not everyone who gets a visa decides to come to Canada. Another factor is the gap in time between when a person is issued a visa and when they move to Canada. This means that visas issued in one year may result in admissions the following year. 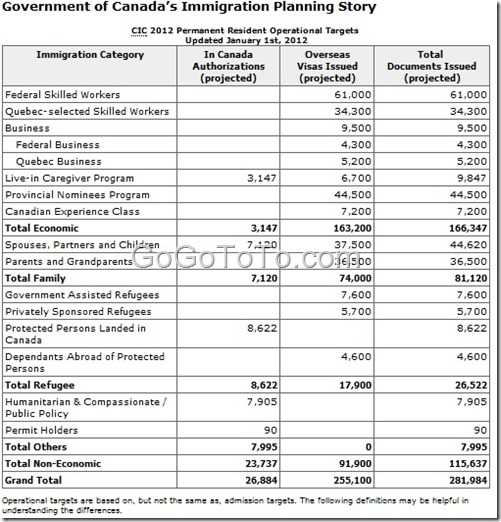