Almost every year we post Canada School Ranking which were released by Fraser Institute. Fraser Institute is a researching organization which researches about how to improve Canadians’ life quality by studying, measuring and communicating the effects of government actions etc.

How people use School Rankings ?

To Canadian people, the best known about Fraser Institute is their yearly school rankings. Canadian parents like to know how their children’s school is in the year and whether the ranking of school is up or down;

The following is part of the Secondary School of Ontario Rankings in 2014 ~ 2015 year: 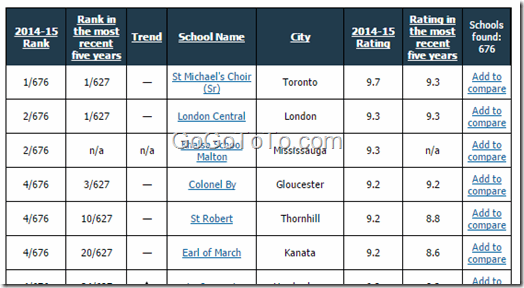 You can find more school Rankings and detail information from their official ranking page.