We posted How to Unlock AT&T Phone For Free from Outside the United States previously. Today we are going to show a real unlock process using a real AT&T phone which was purchased from United States.

We mentioned that unlocking an AT&T phone was simple because AT&T officially releases a unlock code to customers. However, we got to know there were some customers still did not unlock successfully, some customer’s AT&T phones even became bricks. So maybe it is good if we can share our real unlock process since we unlocked an AT&T phone successfully. 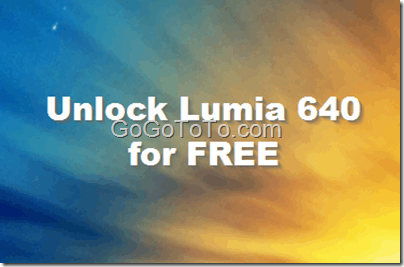 How did we unlock AT&T phone for FREE successfully ?

If you still want to read our real unlock steps, please continue to read the following content;

Why we bought a Phone from AT&T which is in United State ?

In our case the AT&T phone was a Microsoft Lumia 640 which was from US retailer store. Why we select Lumia 640 because it has some features we wanted: NFC, LTE, Miracast and 5” HD screen with Gorilla Glass 3 glass, and the price is very competitive with iPhones and Android phones which support same features.

You can buy Microsoft Lumia 640 from Amazon US website now, the price is just $59.75 USD 25% off and with Free Shipping when we are posting this blog.

Let us add extra info for NFC here, NFC is Near Field Communication which provides more security protection for some applications fields such as Tagging payment, sharing and switching. Specially If the mobile payment will be a more popular payment way eventually, the NFC feature of a mobile phone will be very important. There are lots of main stream of iPhones and Android phones do not support NFC actually, or they are much expensive compared to Microsoft Lumia 640 if they have NFC feature supported.

Note: If you were not in US, you would have to have a US address for shipping, you had friends to bring the phone to you, or you found Freight Forwarders with paying extra shipping fee to ship to you.

Important ! DO NOT power on the new phone with the AT&T sim card which was from US before you starting the unlock process, otherwise you will have to use other steps which are different with the below steps:

We mentioned in previous blog How to Unlock AT&T Phone For Free from Outside the United States, AT&T provides customers a device unlock portal here, check on the service Term and go to next page to input your phone’s information:

Be sure you select “Non-AT&T Mobility customer”, and input your phone’s IMEI number, you can find IMEI from the phone box or from the phone body which normally locates under the battery. And then we input our information but Email must be correct for receiving unlock code which will be sent from AT&T:

After we submitted the unlock request, we received a confirm email which was sent from AT&T soon after:

Thank you for contacting AT&T about unlocking your mobile device.

Your unlock request number is: xxxxxx

Please confirm your request here within the next 24 hours, or it will be canceled.

If we have further questions or instructions, we’ll contact you by email.

You may also check the status of your request by visiting AT&T’s Device Unlock Status Portal.

So we just clicked the link in Email to confirm. and then we just waited for they sending us unlock code. The waiting time is variable due to their handing speed.

The next day we received the email with Unlock code from AT&T, also they provided detail unlock steps:

Thank you for contacting AT&T about unlocking your mobile device.

Congratulations! Here are your unlock instructions:

1. Switch the device off.

4. Switch the device on. If prompted, enter the SIM PIN code.

5. Wait for the SIM unlock window to open.

6. Enter the unlock code provided (8 or 20 digits) and press Enter.

7. Power the device off.

8. Power the device on. The device is unlocked.

We took out the original AT&T sim card from the Lumia 640, and then we inserted our mobile telecommunication carrier’s sim card, then powered on the phone.

After we set language for Phone, and then we came to unlock screen like below screen shot, but maybe you could see another screen which asks you input your sim card PIN number first, since we did not meet the PIN requested, so we just saw the “enter unlock code” screen directly, we also saw we only have 10 times attempts times to input unlock code, so do not input wrong code ! 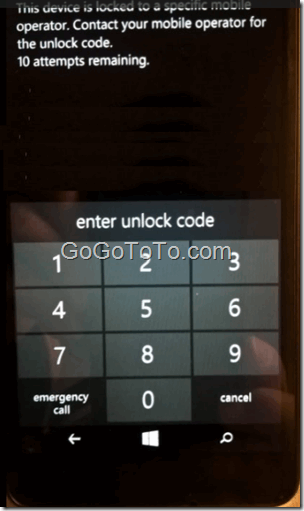 After saw unlock code working message, due to AT&T’s guide, we restarted the phone right away, and then we unlocked our AT&T phone.

The full process is done.